About I-49 South Coalition

Posts by I-49 South Coalition :

By David Mann, I-49 South Coalition Chairman May 9

Very few issues have as much bipartisan support today as infrastructure investment. Roads, rails, bridges, ports, airports, pipelines, broadband, and the power-grid represent essential components of our nation’s economic livelihood. Yet, communities nationwide can struggle to make key infrastructure projects a reality. In South Louisiana, business and community leaders and public officials are working hard to finally bring to fruition a highway project with the potential to stimulate tremendous economic growth and business investment: I-49 South.

With 100 of 160 miles of the project already complete or under construction, we are closer than ever to realizing the potential of I-49 South, known as “America’s Energy Corridor.” Completing I-49 South will provide a game-changing investment for Louisiana with substantial benefits in the following areas: economic development, safety, evacuation, and traffic congestion relief.

To produce a clearer view of the benefits South Louisiana stands to gain, community partners in the Acadiana region recently commissioned an economic impact analysis of completing I-49 South. The study revealed significant economic gains for Louisiana, including a $9.7 billion increase in Louisiana’s GDP over a 21-year period following the project’s construction, and the creation of 6,000 jobs statewide by 2044. This project doesn’t just benefit Louisiana – I-49 will provide connectivity from New Orleans all the way to Winnipeg, Canada, opening the door for economic development opportunities nationally and internationally.

I-49 South – and its associated benefits – can’t be realized, however, if Louisiana fails to sufficiently address our transportation funding needs. Enormous project backlogs have built up as we’ve failed to adequately invest in our infrastructure – a problem not unique to Louisiana.

According to a recent study by TRIP, Louisiana’s roadway conditions cost the average driver nearly $2,500 per year in some areas. To make matters worse, by 2019, without an increase in funding, Louisiana will fail to produce enough federal match dollars for transportation projects, leaving millions on the table for other states. This will make completing critical transportation projects in Louisiana, like I-49 South, all the more difficult.

That’s why the I-49 South Coalition has teamed up more than 250 organizations nationwide to participate in Infrastructure Week 2017. We are amplifying Infrastructure Week’s call to action, #TimeToBuild, by traveling to the Louisiana State Capitol on May 15 to attend legislative hearings and speak directly with legislators about the dire need for investing in our state’s transportation infrastructure network. We know that without modernizing our state’s infrastructure, Louisiana will struggle to compete economically.

Community Foundation of Acadiana contracted two firms to spearhead a study to show I-49 south’s impact from 2016 to 2044.

They found the Lafayette connector could save drivers an estimated 5 and a half million hours on the road.

“You can connect between different areas of the state quicker and in shorter times and in a safer manner and with less damage to your vehicle.” said Eric McClellan of CDM Smith.

It could also generate more than six thousand jobs statewide.

CFA releases study of economic impact on completing I-49

“As the public debates the planning and design of the Lafayette Connector, there was a need for a rigorous, credible, unbiased economic analysis, which demonstrates the economic benefits that would result from completing this critical project,” said Kam Movassaghi, CFA Chairman and former Louisiana transportation secretary. 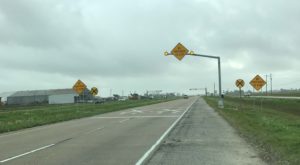 The Louisiana Department of Transportation and Development (DOTD) is implementing enhanced safety measures at the U.S. 90 railroad crossing near LA 85 in Iberia Parish. Changes involve installing advanced signage and flashing beacons to better alert travelers of the upcoming rail crossing.

DOTD indicated concerns from the community about accidents on this portion of the roadway, and noted they are considering long-term solutions to increase safety in the area, including replacing the rail connection with a pipeline as part of the I-49 South project.

The I-49 South Coalition commends board member Rusty Guilbeau for his role in working with local and state officials to secure these necessary improvements.

The I-49 South Coalition wishes to congratulate Secretary/Treasurer Doug Place on his recent retirement. For 22 years, Doug served as the Chief Financial Officer of Dupré Logistics, a Lafayette-based transportation and logistics company. In addition to his leadership at Dupré Logistics, Doug has taken an active role as a member of multiple business, industry, and community organizations, including the I-49 South Coalition, the Louisiana Motor Transport Association, One Acadiana, and the Rotary Club of Lafayette.

Higgins pledges support for I-49 South

“The Louisiana delegation is of one voice regarding the completion of the I-49 corridor, I-49 South,” Higgins said. “It’s got to get done. It’s a matter of economic stability, for obvious reasons, for economic growth. It’s a matter of national security.”

Ken Lazard, Pastor of Destiny of Faith Church and President of the Senior Pastoral Alliance, was emboldened by the results saying, “These poll results confirm the importance of this project. Our organizations are ready to partner with the community to rally around this significant investment.”

“A diverse group of pastors, elected officials and civic leaders announced Monday a new coalition to support completing the Interstate 49 connector ‘the right way,’ which they touted as important for revitalization of neglected areas as well as economic development of the entire region.”

A video highlighting the Broussard I-49 Connector’s progress and potential has been released by the Broussard Economic Development Corporation.

“I think, ultimately, it’s the kind of mega-project that helps the entire state of Louisiana and puts us in a completely different position,” said Lafayette City-Parish President Joel Robideaux.