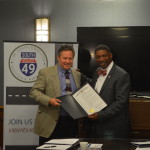 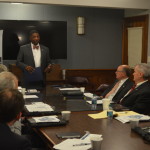 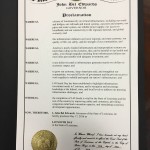 BATON ROUGE — Louisiana’s I-49 South Coalition may be focused on filling the remaining gaps between Lafayette and New Orleans, but advocates said the “Energy Corridor” and its significance stretches all the way to Canada.

“This isn’t just about I-49 South,” said coalition Chairman David Mann, of Lafayette. “It’s bigger than that. This is about a critical corridor that goes all the way to Winnipeg.”

“It has local, state, national and international significance,” said Jason El Koubi, CEO of One Acadiana.

The I-49 South Coalition traveled to the Capitol here Tuesday for its quarterly meeting, where members were joined by Louisiana Secretary of Transportation Secretary Shawn Wilson in conjunction with National Infrastructure Week and a proclamation from Gov. John Bel Edwards declaring it “I-49 South Day.”

“This group represents business and industry all along the corridor who see the value in the project and are here to express their commitment to the project,” Wilson said.

The coalition acts as an advocate to secure local, state and federal funding to compete the 160-mile stretch of I-49 from Lafayette to New Orleans. About 60 miles remains unfinished.

Wilson said a ribbon cutting for a $62 million interchange at Louisiana 318 and I-49 is scheduled Friday just south of New Iberia in St. Mary Parish, which is sugarcane country.

“I-49 is known nationally as the energy corridor, but its completion is also important to agriculture and as a hurricane evacuation route,” Wilson said.