Greater Baton Rouge Business Report – I-49 South has been in the works for decades. But the $3 billion project is coming together, mile by mile.

The signs are still there, strung along U.S. 90 in Lafayette, hinting at an impending interstate that will someday connect the Hub City to the Crescent City. “Future I-49 Corridor,” they read.

These signs are nothing new. I-49 South has been in the works since 1987. So after all these years, what is the status of the proposed interstate corridor? Has the initiative died off or is it still moving forward?

The Department of Transportation and Development says the project is, in fact, alive and well. Over the years, I-49 South has gradually progressed piece by piece. Today the future corridor is more than 50% complete, and several groups, businesses and legislators have gotten behind the push to finish the project.

I-49 South, known as the “Energy Corridor,” comprises the final, 160-mile leg of the interstate that runs along what is now U.S. 90 from Lafayette to New Orleans. Much of the intended route, an estimated 100 miles, is already up to interstate standards, but about 60 miles remain undone, including pricey portions through Lafayette and from Raceland to New Orleans.

“There has been plenty of work done,” says David Mann, chairman of the I-49 South Coalition, a group of business owners who advocate for the funding and completion of the corridor. “You gotta have faith.”

Mann and other proponents say the future corridor will significantly benefit not only Acadiana, but the entire state, by enhancing economic development, increasing safety, reducing travel times and providing an alternate hurricane evacuation route.

“Safety is number one,” says Doug Place, executive vice president of Dupre Logistics, a trucking services company based in Lafayette with locations around the country.

Place says the company’s truck drivers often travel from I-10 in Lafayette to New Iberia, where a number of accidents occur. Having an interstate to travel on, instead of U.S. 90 with traffic and stoplights, would greatly reduce risks and provide a safer, more efficient commute.

Another justification for I-49 South is that it gives commuters driving from Lafayette to New Orleans another route to take instead of I-10, which is infamous for its traffic delays on the Atchafalaya Basin Bridge and when entering Baton Rouge. Place also stressed the importance of I-49 as an alternate hurricane evacuation route. 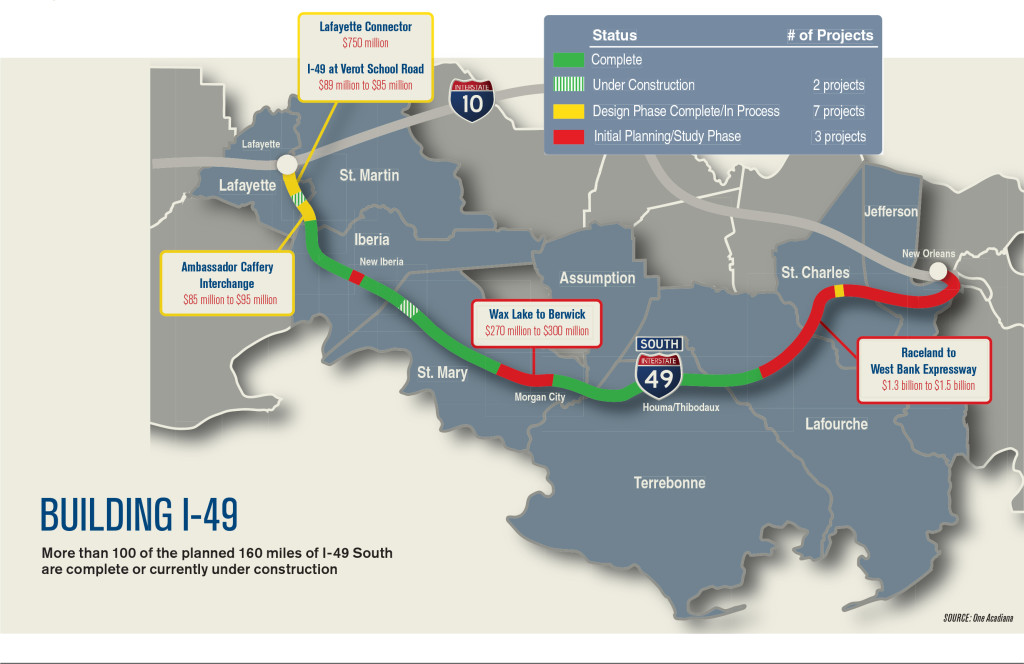 The benefits of the future corridor are clear, but the project has been a long time coming, and people may have lost faith in it along the way. Yet, there seems to be reason for hope again.

“People had been discouraged until about a year ago, but there’s been a renewed interest,” Place says. “By legislators introducing and passing bills, they’re saying it’s time to pay attention to our infrastructure.”

Securing funds for projects like I-49 South is often what holds up the construction process, but proponents say government officials are beginning to recognize the need for the corridor and looking at ways to fund it.

“Both at the federal and state level, we need transportation funding solutions,” says Jason El Koubi, president and CEO of One Acadiana, formerly the Greater Lafayette Chamber of Commerce. “Many, many places including Acadiana have had to wait too long for critical infrastructure projects.”

As head of One Acadiana, El Koubi has had the opportunity to talk to hundreds of business owners across Acadiana who have told him I-49 South is a top priority for them. In response, One Acadiana has made the future corridor its top priority as well.

The organization is working to sustain momentum, get the word out and accelerate funding and design plans for I-49 South. Members are also collaborating with gubernatorial candidates to put their support behind the project.

El Koubi says the corridor will have a huge economic impact, especially for the state’s the oil and gas industry as these products are frequently transported along the route, and it will increase tourism in Louisiana by providing a “more robust linkage” between two major tourist areas: New Orleans and Acadiana.

The entirety of I-49 South will cost an estimated $3 billion, says Deidra Druilhet, a spokeswoman at the DOTD. But that price is just half of what the project was originally expected to cost.

“Funding plays a significant role. That’s the ultimate thing,” Druilhet says. “We are strategically placing the funds we do have in the right areas for the project. But of course, it’s a $3-billion project. We’re also looking for alternative sources.”

Several separate sections make up I-49 South. Most have been completed and some are currently being worked on, such as the U.S. 90 Interchange at Ambassador Caffery in Broussard, where the road will be widened to six lanes.

DOTD will also soon award a design-build contract for the U.S. 90 Interchange at LA 318 in St. Mary Parish, expected to begin in late 2015 or early 2016. A number of smaller projects, like creating frontage and service roads, have also been completed over the years.

One of the major sections left is the $750-million Lafayette Connector, which will run from I-10 to Pinhook Road, just past the Lafayette Regional Airport. Druilhet said design work for the connector is set to begin this summer. The other major project is the route from Raceland to the West Bank Expressway, which is in the initial planning stage.

Although a final completion date for I-49 South has not been set, DOTD is fully committed to seeing the project through.

“We want a reliable, efficient, safe highway network,” Druilhet says. “One that will sustain economic development and improve the daily commute for workers.”